The United States government’s piss poor response to Hurricane Katrina illustrates in amazing clarity your failure to protect this country. Exchange Katrina with an attack by a rogue terrorist network. Would the outcome be any different? Your incompetence is mind blowing. You have diverted most of this country’s resources to a pointless war, leaving us vulnerable to attacks both man-made and natural. You manipulated the American people’s fear of terrorism to obtain re-election in spite of your incompetence. Shame on you. You are not a leader. This country deserves more than your kind. You should resign from office in shame.

I’ve resisted for a long time, but I can’t take it anymore. I’m going to have to go ahead and call for the assassination of Pat Robertson. Will somebody please kill him for me? Gracias.

So, I had jury duty this past Monday. For the most part, it was uneventful. I had to be there at 8:15am with about 200 other people. After I checked in, I retired to a surprisingly comfortable chair and alternated between playing poker on my cell phone and reading my poker book (yes, I’ve turned into a poker geek). When I wasn’t doing that, I was people watching. As you can imagine, it was a pretty diverse group. The common thread we all had was our annoyance at having to be there for jury duty.

As I was scanning around the room, I noticed this older woman across the aisle from me. Her profile looked a lot like Jane Fonda. I was thinking about how much she looked like Jane when she turned her head toward me. It was Jane Fonda! I know what you’re thinking, but I’m crapping you negative here. I am 99.9% sure it was her.

I was thinking that surely Jane could get out of jury duty, but the more I thought about it, the more it made sense. She’s a very down to earth person, of course she’s politically active and so I imagine she would perform her civic duty when asked.

This is actually my second Jane sighting in Atlanta. The other time was at Grant Central Pizza next to Grant Park. She was sitting in a booth with her daughter and grandchild sipping on a Guinness draft. I thought that was pretty cool.

The other weird thing about all of this is the fact that my mom looks a LOT like Jane Fonda. When I was growing up, she would often be stopped in grocery stores by hysterical moms wanting an autograph. This was back when Jane was immensely popular due to her workout videos.

So, anyway, I saw Jane Fonda at jury duty. By the way, we both got dismissed without having to serve on a trial.

This is fucking ridiculous.

The autopsy results for Terry Schiavo showed that she was in a persistent vegetative state. This should have been good enough to finally silence all of the asshole politicians who slandered Michael Schiavo’s name and weighed in with their unqualified opinions, but apparently not. Now ol’ Jeb wants to investigate what took Michael so long to call 911 15 years ago.

I am so so so sick of this damn case. The only good that came out of it for me was the discussion in our family about living wills. My aunt was especially vocal in her announcements to anyone within earshot that she would not want to be kept alive in that state under any circumstances.

Well, when she had a massive brain aneurysm two weeks ago and was being kept alive by a respirator with no brain activity whatsoever, it was very easy for the family to make a decision about what to do. For that I’m thankful.

Apparently, the made you think project has been pretty successful—at least in Germany:

“This has been going on for about a year now, and there must be 2,000 to 3,000 piles of excrement that have been claimed during that time.”

I read this headline in my newsreader today:

Here’s some search and replace fun:

America is a crack addict and ANWR is it’s mother’s milk money, tucked away in a sock drawer.

The Democracy for America web site has a cool little feature that lets you search for Social Security stories in your area. It’s a good way to show how well Social Security works, how many people have benefited from it and why it should be saved, not dismantled. This is a story I found near me:

I retired recently. I received a small payout from my employer which I rolled over to an IRA. I made several adjustments to my 401K and IRA plans, too. I started saving for my retirement as soon as I could, but the amount was cut in half during the stock market crash of 2000, never really recovering. But the real story here is that of all the accounts I had to deal with, Social Security was the only one that worked smoothly. I had to prod and cajole investment banks to carry out my wishes. I never really felt I could trust them to do what they were supposed to do. My Social Security payments come like clockwork, and there were no mistakes. I am very grateful that our government saw fit to provide some income, however modest, for us when we no longer work full time. It allows us to maintain a dignified standard of living without burdoning our children, and in my case to do free-lance work in a field I love.

As I sat idling in endless traffic yesterday, surrounded by W stickers and noxious emmisions belched by SUV’s, I got the added bonus of listening to W’s inauguration highlights on NPR. Oh joy!

I just have to point out how it seemed very appropriate that Rehnquist sounded like Darth Vader thanks to his tracheotomy. I couldn’t help but make a Photoshopped picture of what I imagined in my brain. Enjoy. 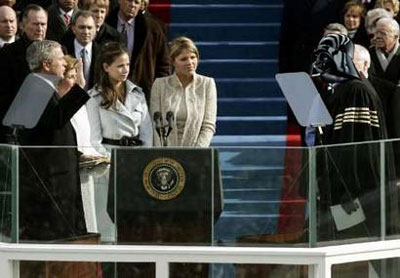 Is anyone else finding it hard to remove their Kerry/Edwards sign from their front yard? I just can’t bring myself to do it. It seems that a lot of people feel the same way as I still see these signs everywhere.

I feel pathetic and subversive at the same time. It’s an odd combination.