This is great: List of films ordered by uses of the word ‘fuck’.

The wife and I were watching a show on television last night about oil consumption. The show was a “what if” scenario and was portrayed as if it were a report on something that actually happened. The scenario was that oil scarcity had led to prices that were so high, it brought our economy to a halt. It showed airlines shutting down and people moving out of suburban neighborhoods so they could live closer to the city and depend less on their cars. People were “interviewed” about what had happened to their lives as a result of the oil shortage.

Once we realized what was going on, the wife said, “so this didn’t really happen. That kid being ‘interviewed’ is just lying to us.”

So, that’s another word for an actor: a liar.

We had a good laugh over that one.

The New Pornographers covered a song by the forgotten 80’s band, Toronto, called “Your Daddy Don’t Know” for a movie called Fubar. They also did a video for the song and it cracks my shit up.

It has all of the best cheesy 80’s video elements: god awful clothes/hats, teased hair, mustaches/beards, inane back story, cheesy band studio performances, even a fat guy in a cape with white clown makeup. Here are some stills from the video:

I must say, they did a really good job recording this song and Neko Case sings her ass off. Trust me, you’re going to love this.

This list of drink ordering Do’s and Don’ts is fucking hilarious. Here’s one of my favorite Don’ts:

Be “The Microbrew Aficionado”
Usually a pseudo-hippy who can’t tip a quarter but can’t bring himself to drink “schwag,” and who has to sample some new berry-wheat-harvest-ale that he heard about at Burning Man. “Do you have the new Vernal-Equinox Special Welcome-Fest?” “Does Anyone?” Here’s your Newcastle. Go.

I just want you to know that even though he is not a super hero, Matt Haughey wears tights. Read this post on his blog and marvel at his sly mention of said fact.

Pretty sneaky, Matt. Never underestimate the power of the blogosphere in uncovering dirty little secrets. I’m going to bring you down*!

* I’m not going to bring you down.

My band, Luigi, is recording a new album. This past weekend was spent in a windowless recording studio mixing down some tracks. We’re extremely happy with the results.

As I headed into the studio on Saturday, I couldn’t help but notice this huge billboard situated on top of the building right next to our studio. It’s a PETA ad featuring David Cross. I had to take a picture of it with my camera phone because David Cross’ ass literally watched over us all weekend as we worked on our album.

Michelle, our singer, went on tour with David Cross a few years ago with her previous band Ultrababyfat, so it’s kind of appropriate. Appropriate and hilarious. 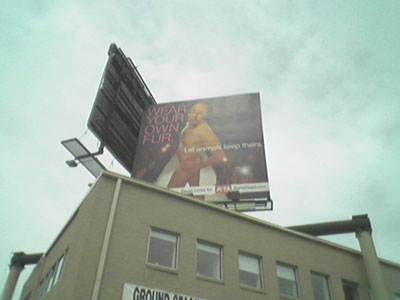 The other night, while working out on the treadmill at the YMCA, the perfect song came on my iPod. Picturing all of us furiously working out as these lyrics echoed through my headphones brought a smile to my face.

Imagination, that’s the way that it seems
Man can only live in his dreams
Oh, it seems so hard.
If I’ve lived a thousand times before
And if I’m gonna live a million more
Always brings me down

In furthering my effort to direct your attention away from this blog, I bring you Veiled Conceit, wherein a very talented writer ridicules the poor souls who inhabit the New York Times’ wedding and engagement announcements with rapier wit. The most recent entry, Adventures in Infidelity, does not disappoint.

The wife and I had a busy, but fun weekend hosting a baby shower for our friends Johnny and Darolyn. It wasn’t a traditional baby shower, since we had a keg. I guess something about an impending birth makes people really excited (and thirsty for beer).

It inspired me to write a haiku:

Okay, this gets my vote for most interesting story I read today:

Police in Paris have discovered a fully equipped cinema-cum-restaurant in a large and previously uncharted cavern underneath the capital’s chic 16th arrondissement.

Make sure you read the whole article so you can get to the part where a group identifying itself as the “Perforating Mexicans” takes credit for the whole thing.

The Perforating Mexicans. That’s sooo the name of my next band.