One of my favorite movies of all time is The Big Lebowski. It’s a brilliant comedy that’s endlessly quotable and has some of the most memorable characters in recent film history. There is so much going on in this movie, that I could take up your whole browser trying to summarize it, so I’m just going to have to assume at this point that you’ve seen it. If you haven’t, go rent it, watch it and come back to this web page. It ain’t going nowhere.

One of the themes of the movie is unchecked aggression. Some direct parallels are made between Iraq’s invasion of Kuwait and The Dude’s harassment by Jackie Treehorn (his goons pee on The Dude’s rug). At one point, The Dude’s stoned brain rattles off a line from something he had overheard on TV: “this aggression will not stand.” It’s a line from George H.W. Bush’s speech about Kuwait that the Dude heard as he bought some half & half from Ralph’s grocery store. The Dude is so broke, incidentally, that he actually has to write a check for $0.69.

Watching The Dude try to piece together all the events of his life is fun to watch. He is such a burnout that his synapses don’t always connect and he stumbles as he tries to solve the mysteries of the storyline. It’s not entirely unlike watching George W Bush try to make his way through a press conference. Which brings me to Iraq again and our recent history with that country.

At this point the reasons for America’s war with Iraq are so obscured by excuses and lies and manipulations that I sometimes feel like The Dude trying to piece it all together. 42% of Americans believe Iraq was DIRECTLY involved with the attacks of 9/11 (Newsweek poll from Sept ’04, found on this page). Almost half the country believes something that has repeatedly been proven to be false. What the hell?

So, what am I talking about? Oh, yeah, the Big Lebowski, Iraq, Kuwait, The Dude, 9/11, etc. Well, imagine my surprise when it was pointed out to me today that there is a prophetic message in the Big Lebowski that ties all of this together (kind of like The Dude’s rug).

Remember earlier when The Dude writes that check for $0.69 at Ralph’s? Well, check out the date on that check: 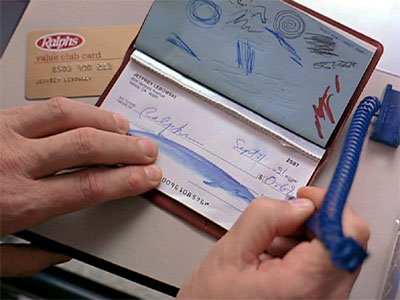 September 11, 1991. Exactly ten years before the attacks. Coincidence? Yes. Weird? Definitely. I need to go sit down for a while. Mind if I do a J?

57 thoughts on “The Dude Prophetizes”